While I’m off doing something that makes me quake in the boots I’ve already vomited on once, if you feel like helping me up my day’s earnings — they’re at $1.20 so far, but the sky’s the limit! — feel free to check out my posts as the NY Unemployment Examiner.

My Busy and Important unemployed life demanded that I buy a planner for the first time. So far I have lots of exercise classes written in there, which is a great first step!

I also made an elaborate color-coded Excel spreadsheet to keep track of the 63 (and counting) agents to whom I have sent my proto-classic manuscript. I should make another to keep track of the jobs I have applied to, but that would cross the line into depressing. At least the agents have been encouraging, even the ones who pass. One fellow even asked me to keep in touch and let him know what eventually happened because it was such a close call.

I’ll tell you what’s eventually going to happen: I’m going to get to meet Barack Obama. Yeah, that’s right. Somehow I will get from here — in pajamas in an armchair with my laptop — to a handshake with our heartthrob president and it will be because some agent takes a chance on my book. (Maybe if I write that in my planner for sometime in the future, it will happen. That’s the Secret all over, right?)

Essentially I’m trying to stay active and focused. The big project at the moment is the mortgage, because if we can actually get the pre-approval and make a bid on the apartment we want, that will address one leg of 2009’s Triathlon of Major Problems. These are, in case you’re just joining us, that I

Is “problems” too strong a word? Should I say “challenges”? Someone who knows the Secret let me know, please.

1) is the hardest to fix, as I feel like I’m competing with every English/Film/Humanities major in New York City for every open position. But the unemployment checks help and I’m not in danger of insolvency soon.

2) could turn out to be a good example of falling up, if we do manage to get a loan and buy this one guy’s amazing Cobble Hill apartment for appallingly little money (by New York standards). Regardless, though, I’m going to sow the fields with salt before we leave. I can’t believe we planted a garden in our backyard and won’t get to stay here to see it bear fruit come summer.

3) is not as dire as it seemed initially, thank god. I’ve now been to and from Washington twice to see him (well, and to see C.J. Roberts tussle with Obama, wish my grandma a happy 96th birthday, and meet my brother’s new 24-year-old acupuncturist Californian girlfriend). Everyone’s feeling more optimistic now that there is a treatment plan in place for him. This time last year, he was just getting over being chemo’d and radiated; now he gets to do it all over again, after which he gets to be skillfully disemboweled for the second time. Oh, the wonders — and limitations — of modern medicine.

My February horoscope looks good, though!:

The year 2008 seems to have been a little frustrating for you, but planets gathering in your eighth house will hasten your transition into your new life phase. … On the agenda will be the basic questions: What will make me happy? How can I go about creating real, lasting changes – ones I will genuinely want – that will be in place for years to come? Certainly you want stability, so that’s what will be on your list of questions to answer, too.

I’m going to write a book about counter-intuitive things to do when you’re unemployed. Like, join a gym! Mr. Ben and I took this opportunity to join the Brooklyn YMCA because of the pool and the classes and because he told me he’d withhold physical intimacy unless I do something to reduce my stress levels, which are registering at somewhere between Chernobyl and Three-Mile Island and the exposure to which are threatening to turn him into a three-headed dog.

Start an IRA! I did that the last time I was booted from a job. It has since lost more than half of its value, thanks to the current economy. Still, it makes you feel grown up and responsible to have an IRA, especially a droopy one, since you can join in the chorus of grumbling by real adults about the stock market. Camaraderie is important during these dark times, and to stave off a feeling of isolation while you’re spending most of your days at home wrapped in a blanket talking to your dead orchid about the book deal you’re totally going to get any day now.

Apply for a mortgage! Maintaining your equilibrium is key, as is a feeling of forward motion. (We are all sharks: we move or we die.) Talking to banks about rates and assets helps you feel more in control, as well as active and connected to the outside world. If you actually get pre-approved and can put in an offer on that fantastic Cobble Hill apartment across the street from your new gym, all the better.

Advertise your capabilities on Craigslist! Just because you’ve been laid off doesn’t mean you don’t have skills. You deserve to be paid to help other people do things you yourself have often failed to do, like find a great job and keep it.

Get a fancy haircut. Gotta keep up appearances! This works well when a guy you know offers a two-for-one deal at his hoity-toity studio and you and a friend can each get away with paying only $34 each to look so fabulous no one will notice you’re still vaguely green and pulsing from the radioactive stress.

Post pictures of you and your friends looking happy. This will remind you that you have friends and also that you have, at moments, been happy: 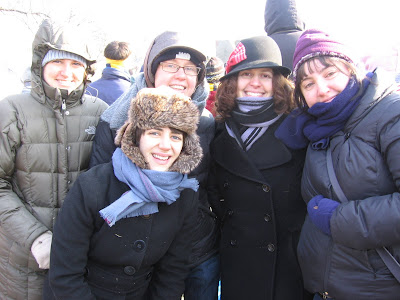 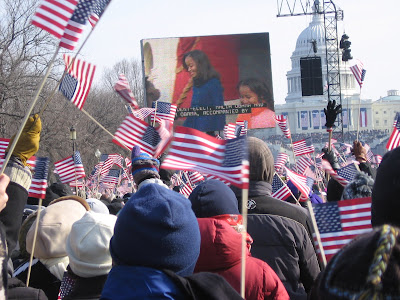 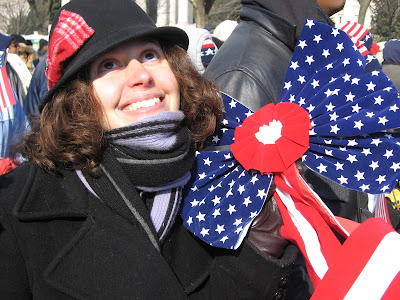 My life is beginning to feel like something out of the Series of Unfortunate Events. After a month and a half of paralyzing anxiety, I finally find the right chemical assistance only to have to face:

I’ve been reacting in the most logical possible way: either by steadfastly avoiding reality by rewatching action/adventure movies and musicals, or by throwing myself into the job and apartment hunt with the vigor of a young Sabra.

The upshot of these various, often contradictory efforts is that I have a few leads, one semi-solid freelance blogging gig, one future client for my new business as a paid know-it-all, a new membership to the Brooklyn YMCA, and a mortgage application in my future, because what should one do when laid off in a shitty economy except buy an apartment?

This week will be a break from everything. I head down to DC to see Hopey get inaugurated and to hold my father’s hand, and I won’t be back until Friday, at which point my oldfriend Rebecca is taking me out for an Evening of Fun. This is a tradition for us: when she last had a series of unfortunate events plaguing her, I planned a Day of Fun for the two of us that culminated at Build a Bear where I birthed a koala named Krackden. The best part came at the register where the chipper lady ringing me up had me say the name out loud. With the courage of my convictions and ignoring the resulting look of disgust, I said, “Krackden.” He has been a comfort to me ever since.

“How are you?” asked Dr. Russian yesterday.

“Well, I was let go from work, I’m probably losing my apartment, and I have a cold. Other than that, I’m okay. How are you?”

The best thing about doctors is that you don’t have to make small talk. The best thing about Dr. Russian specifically is that, as a recent immigrant, he has a limited amount of what you might call cultural capital. I have had to define the following for him:

He tried to bond with me with about movies, which was a lost cause. Finally I threw out a name he recognized: Ingmar Bergman. “Oh but he is depressing,” said Dr. Russian. “I tried to watch — what is that one? With the Death? The Seventh Seal. Afterward I was almost nauseous.”

Oh! Well, what sort of movies does he like?

He considered for a moment and then said, “David Lynch.”

Even apart from mandatory check ins with health professionals, I’ve been keeping myself busy. I attended a great, free introductory class at the Gotham Writers Workshop, followed by dinner with a friend; I went to the second meeting of my book group last night to discuss Do Androids Dream of Electric Sheep? (Short answer: Yes, with an if. Long answer: No, with a but.)

I have Man on Wire from Netflix, two action-adventure movies from the library and My Fair Lady. I’m rereading Prisoners of Azkaban. And I’m trying to limit the number of times I refresh the same job pages. Overall my strategy is to be less frenzied, less angry (if possible), and to treat this break as a sort of vacation. A working vacation, to be sure, but still. Thus my compromise is I get out of bed at 8:30, but I stay in pajamas as long as I like.

12:30: Friend calls, asks if it’d be okay to drop by. Pause Harry Potter to put on a bra. Remain in pajamas.

3:10: Doorbell rings! It’s the landlord dropping by to tell us that the people who bought our building may indeed want to take our apartment when our lease runs out at the end of March. We could take the 3rd floor apartment, though! Luckily it’s astronomically expensive, or I’d have to feel like maybe my luck is turning.

3:30: At the Coop playing bumper carts with the thousands of other shoppers. Who are all these people at liberty on a Monday afternoon?

4:30: Rebecca and I walk back to my apartment with our groceries. I rant about my general misery and ill fortune and their potential alleviations, leading to the following exchange:

REBECCA: No, I think everyone’s more tolerant of writers being weird looking.

ME: Are you calling me WEIRD LOOKING?

REBECCA: What? No! No! You’re beautiful! You’re the one who said you’d need to lose weight!

ME: And you’re the one who called me WEIRD LOOKING!

I can only hope that at some point this day will end.

8:30: Wake up after a solid five hours sleep. No point lollygagging about — must get going! If 2009 is to be a Year of Wow despite this recent setback, there’s work to be done.

9:15: Why am I even bothering? There’s nothing here and anyway I have no idea what I want to do.

9:30: Try to apply for unemployment. Log in rejected because the site insists I don’t know my mother’s maiden name. This reminds when of when my father said “Bastard” once when I was a kid, and I asked him what it meant. An honest man, he replied, “Someone who doesn’t know who their father is.” For a while thereafter I assumed a bastard must be someone very, very dumb.

9:35: Craigslist should come with a warning that says “Abandon all hope, ye who enter here.” Mediabistro, Bookjobs, Monster are no better. Nobody loves me, everybody hates me, guess I’ll go eat worms.

10:00: Abandon pathetic efforts in favor of watching the first Harry Potter movie. Will try being responsible again after lunch.