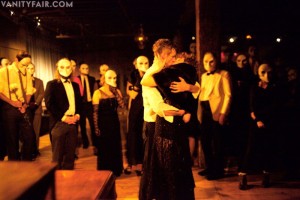 Last night a strange man held my hand. That’s right: I, Ester Bloom, married lady, mother of a young child, partnered with the same dude since I was 18 years old, committed hand-adultery. I had an anonymous one-night-hand-stand.

Mr. Ben and I were at SLEEP NO MORE, the immersive theater experience where you wander around a huge, five-floor, dimly lit but extravagantly designed set that was once a hotel, forbidden to speak or to remove your opaque white mask. Around you, actors and dancers silently recreate scenes from and inspired by “Macbeth.”

To reach peak surreality, as an audience member, you are encouraged to explore the dreamscape solo. Mr. Ben, who takes this shit very seriously, waved me goodbye early on and dashed off to try to get as many one-on-ones as possible. (That’s when certain cast members take you “off-stage,” into a small enclosed space, for a special bonus dose of weirdness.)

So there I was, be-masked, silent, and alone, watching the banquet scene in the basement, when another audience member — a well-dressed white dude — took my hand. TOOK IT, LIKE IT WAS HIS. Like he was Christopher Columbus and my hand was America.

I cycled through several immediate thoughts:

+ Oh, how embarrassing for him! He must think I’m someone else.

+ Is he a member of the cast who’s going undercover, The Prince and the Pauper-style, by wearing the mask of an audience member?

+ His hand-holding sure is confident! He probably works in derivatives.

+ Is this like improv, where I’m not supposed to say “no,” at least unless he does something super creepy?

While I was wrestling with all that, Christopher Columbus assertively led me out of the ballroom and to another scene, and then another. After a few minutes it became impossible to shake him off, not just because he was holding my hand so tightly but because perhaps I had missed my window of opportunity. Soon we would be joined together for life! What would I say to Mr. Ben and Babygirl? “Sorry, Christopher Columbus grabbed me. Gotta go. See you maybe in twenty years when he lets go!”

His hand was very warm, yet dry. I didn’t hold his hand back, per se, but I did allow my hand to be held. In almost fourteen years, this is as close as I’ve come to sexual contact with a person besides the father of my child.

Finally, Christopher Columbus led me to the bar on the second floor, which is the oasis in the SLEEP NO MORE desert: the place where you’re allowed to eat and drink and catch your breath and talk.

“Hello,” I said, because I’m exceedingly clever and make my living using words.

He shrugged and smiled and disappeared. That was the last I saw of Christopher Columbus. I put my mask on and went back to SLEEP NO MORE.

“For saints have hands that pilgrims’ hands do touch,And palm to palm is holy palmers’ kiss.” —Romeo & Juliet

This is not a good time to be asking people for money and, um, that’s my job. Earlier this week, a woman flat-out laughed at me. I imagined her with a scotch in one hand and a gun in the other.

So I think it’s a good week to do things other than work. Like think about the fantastic Dirty Dancing, which I just saw for the first time in a theater as part of a Jezebel / Abortion Access Fund event. The screenwriter-producer Eleanor Bergstein came to encourage us all to take risks, as people and as artists, and, when we put controversial events in our commercial movies, to make them impossible to remove.

“I’m so sorry,” Lipman told the acne cream company that was willing to sponsor Dirty Dancing, as long as the illegal abortion — which, in the film, has near-tragic repercussions — was removed. “It’s the linchpin of the story. Nothing would make any sense if it were removed.” The acne cream bowed out, the film was released regardless, and it became an international success.

“Always make it the linchpin,” she instructed us. “That way you can’t cave to pressure even if part of you wants to out of fear.”

* Like Wet Hot American Summer, this is a movie about Jews that never explicitly says it’s about Jews.

* During filming, the seasons changed, so the crew had to spray-paint the leaves on the trees green.

* Jennifer Grey was 27 during filming and Patrick Swayze was 35.

* The crawling-on-the-floor dance scene was improvised

* There are like 15 plotlines going on. That’s pretty ambitious for a movie about school kids on vacation with their family.

* I didn’t see it all the way through until I was 27 myself because my proto-feminist high school self caught a glimpse of it on TV and was insulted by the fact that the main female character was called “Baby.” Little did I realize that that was intentional — that the film was about the infantilization of women. Her liberal, well-meaning parents named her Frances after the first woman in the cabinet but then called her Baby! What could be a better example of the mixed messages affluent white girls received in the mid-20th century? Go to college but then marry some Ivy Leaguer and be content raising his children. Read and think, but not too much or no one will want you. And so on.

* Of course, the movie is also about class, back-alley abortions, and how people in 1963 would look if they had 1980s hair and dressed like they were on their way to a Jane Fonda aerobics class. (See above re: plotlines.)

It’s too bad Eleanor Bergstein didn’t write more movies because this one really is near perfect for what it is. Why would anyone try to remake it? What could they possibly add?

Conversation with a co-worker:

Me: I have to go to the post office to buy a couple stamps.
Her: Why not use the stamp machine here?
Me: Because that would be stealing.
Her: Nah, everyone does it.
Me: You know, at my last office, we had a long conversation about whether it was okay to ask for a cup of water at Chipotle and then fill the cup with soda. For some reason, everyone thought that was fine!
Her: Sure!
Me: Do you do that?
Her: Of course. Well, I don’t go to Chipotle. But I used to shoplift sweaters from H&M all the time. I was kind of a klepto when I was a kid. It was fun! The sweaters were too small for me, even.
Me: I was the kind of kid who never smoked, never cheated, never stole …
Her: Ugh — moral.
Me: Except I’m not a “good person.”
Her: I know!
Me: Hey!
Her: Well, I knew what you meant.
Me: Yeah. I don’t know, I just had an inborn sense, from the time that I was little, that some things were wrong and so I never wanted to do them. You know what I mean?
[Pause]
Her: I really liked stealing penny candy, too.