My take on the new Woody Allen movie Midnight in Paris is up on The Film Experience: 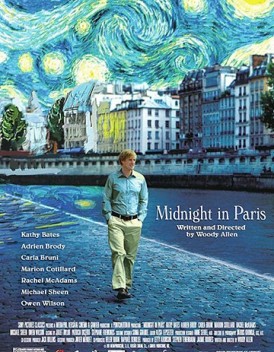 “I understand the impulse to make ourselves hoarse praising the man. After all, we’re talking about Woody Allen, auteur extraordinaire, Oscar-winner, redefiner of comedy, granddaddy to a thousand less-talented copy-cat narcissists. He’s so prolific he probably doesn’t even remember making one of my favorites of his films, the wistful and imaginative Purple Rose of Cairo. (Such small, delightful movies are often called “gems,” which confuses me as gems come in all sizes; in fact, a woman I know recently received one that may weigh more than she does. But that’s neither here nor there.)

Friends, a mediocrity is a mediocrity, whether it comes from Shakespeare or Dan Brown. Why do we insist on grading Woody Allen on a curve?”