This is the fantastic Google map we put together for our holiday vacation 2010, codename: “Persistence.” Twice JetBlue canceled our flights to New Orleans because of the blizzard — you know, the one that was highly anticipated and yet took everyone by surprise, much like the difficulty of raising children. (I imagine.)

So, on the day that Brooklyn was flooded with snow, and no one had shoveled sidewalks or plowed streets, Mr. Ben and I threw on expressions of great determination, and dragged our suitcases behind us to the subway station — an exercise that gave me new insight into what it must be like to dispose of a dead body. We took that train to Penn Station, where we waited 45 minutes for a delayed and usuriously overpriced Acela train to DC.

My little brother, god rest his soul, volunteered to pick us up at Union Station and ferry us over to Don’t-You-Dare-Call-It-Reagan National Airport. And from there, at long last and great expense, we caught a new, on-time flight to New Orleans, where the weather was a crisp 40 degrees but the ground blessedly free of snow.

We made it to our hotel on Bourbon Street and collapsed. Yes, I know, Bourbon Street is Boobies Street, a hilarious choice for a non-drinker and non-exhibitionist who likes her sleep, but when you plan things last minute, you have to make some concessions. The hotel itself was pleasant enough but I wouldn’t recommend it to anyone who doesn’t enjoy hopscotching around puddles of vomit on their way home at night.

Virtually everything else about our trip to N’awlins though was vomit-free and, frankly, spectacular. The food — from crayfish omelettes to hidden Vietnamese cafes! The music! That’s New Orleans’ own Dr. John, with whom we had an appointment at the famous club, Tipitina’s. We made it to the very front row and so stood close enough to the old-time blues man that we could make out the paisley print on his buttercup-yellow silk shirt and smell the marijuana drifting off the stage. This one was in Treme, where American music was born — at least according to the guide of our walking tour and our friend Robert, the docent of the Backstreet Cultural Museum: Robert was full of stories from the many years he spent working for the mob bosses who own and run the French Quarter. Incidentally, he makes those fantastic Mardi Gras Indian costumes — one a year — by hand.

In short, whether tromping through cemeteries or parks or museums or zoos, we were in Heaven. Isn’t this what Heaven looks like, after all? 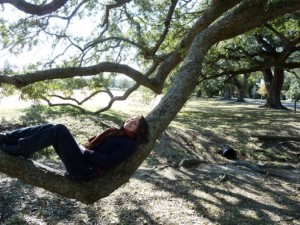 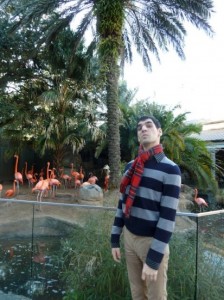