Considering that all I want to do is eat cereal out of the box and read novels, I’m doing pretty well. After some searching, I found two shuls with daily minyans so that I can say Kaddish. Neither’s perfect: One is inconvenient and the other is Orthodox. Whatever.

I’ve been going to work and getting things done. I’ve continued showering; I even made it to the gym last night where I ran two and a half miles. I’ve only had one dream where my father was still alive and disappointed in me.

I miss my father. But, anyway.

The whole death thing really knocked me for a loop. Wow, it was fast. As recently as September, my dad was being treated. There was medicine, and where there is medicine there is hope, even if one is poisonous and the other is flimsy. Then, suddenly, he had six months; then merely weeks; then I was in the backyard of the Casey House in Montgomery County, sleep-deprived and tear-glazed, casting a protective shadow over the bed in which my father had managed to open his eyes for the last time. It was a blue-and-yellow afternoon, with hawks circling several layers up from butterflies, and we had decided to roll his bed outside.

Everyone who could come came over his last couple days. We pressed his hand, played his iPod, read to him from Isaiah. The rabbi shook a lulav and an etrog at him, because it was Succot, and then kissed him on the forehead. And that afternoon, twelve hours before his labored breathing faded away, he saw us there. He knew we had gathered, for him, for whatever good it would do. For an hour or so, he managed to stay conscious, my brilliant, generous, lazy, sentimental, anxious-depressive-insomniac, loving, witty father, and then he dipped under again and never woke up.

Then, suddenly, there were things to do. We had to sleep, and write obits, and talk to the funeral home, and plan speeches. We had to break down and get up again. My mother cried; I’ve never seen her look so lost. We had to deal with that. We had to eat, and dress warmly for the funeral, because the day we interred him was a day borrowed from early March. It had everything but crows in it. I think I cried hardest when my father-in-law lifted the shovel to help bury my father.

But my friends, my friends, my friends did everything that is good in this world, everything good people do. At one point at the cemetery three of them had staked out places around me, bolstering me. Later, they came to the house and sat with me on the floor. They came every night and sometimes during the day, too. The experience was, as I said, a plane crash, but it was also a water landing on par with Sully’s, because of my friends and my family’s friends and my family. I can’t thank you enough. 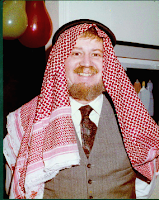